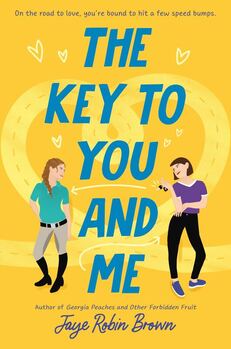 COMING APRIL 2021, FROM Harper Teen
A DUAL POV ROMCOM ABOUT TWO GIRLS FALLING IN LIKE

Piper Kitts is spending the summer living with her grandmother, training at the barn of a former Olympic horseback rider and trying to get over her ex-girlfriend. Much to Piper's dismay, her grandmother is making her face her fear of driving head-on by forcing her to take lessons with a girl in town.

Kat Pearson has always suspected that she likes girls but fears her North Carolina town is too small to color outside the lines. But when Piper's grandmother hires Kat to give Piper driving lessons, everything changes.

Piper's not sure if she's ready to let go of her ex. Kat's navigating uncharted territory with her new crush. With the summer running out, will they be able to unlock a future together?
Pre-Order Personalized Copies HERE 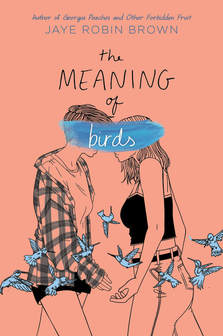 ON SHELVES NOW, FROM Harper Teen
Before:
Ever since her father’s death, Jessica has struggled with the anger building inside her. And being one of the only out teens in school hadn’t helped matters. But come sophomore year, all that changes when effervescent Vivi crashes into her life. As their relationship blossoms, Vivi not only helps Jess deal with her pain, she also encourages her to embrace her talent as an artist. Suddenly the future is a blank canvas, filled with possibilities.

After:
In the midst of senior year, Jess’s perfect world is erased in an instant when Vivi suddenly passes away. Reeling from another devastating loss, Jess falls back into her old ways. She gets into fights. She pushes away her family and friends. And she trashes her plans for art school. Because art is Vivi and Vivi is gone forever.

Desperate to escape her grief, Jess finds solace in her gritty work-study program, letting her dreams die. Until she makes an unexpected friend who shows her a new way to channel her anger, passion, and creativity. Jess may never draw again, but if she can find room in her heart to heal, she just might be able to forge a new path for herself.

“Told in alternating "then" and "now" chapters, the moving narrative captures well the nonlinear progression of Jess' grief and emotional growth. Frank and accessible, this gritty drama realizes with great compassion and empathy the ways reckoning with loss can manifest. ”  - Kirkus Reviews (Starred review)

“Brown depicts Jess with raw realism, making the early sections hard going: she seems hell-bent on alienating everyone but her patient family to ensure that if Vivi doesn’t have a future, she won’t, either. At the same time, the anger-soaked beginning enriches the payoff, when a grief group and blacksmithing start to help Jess find her way, not out of grief, but back into life. ”
- Publisher's Weekly

"Brown’s exploration of loss is raw and devastating, placing readers directly into Jess’s turbulent experience through evocative present tense narration interspersed with vivid flashback chapters. The supporting characters are also complex and distinct. Brown captures the ambivalence of grief in this searing and ultimately hopeful novel."
- School Library Journal
​
THE MEANING OF BIRDS HAS BEEN NOMINATED AS A LAMBDA LITERARY AWARD FINALIST FOR THE 2020 AWARD YEAR IN THE CATEGORY OF LGBTQ CHILDREN'S/YOUNG ADULT WITH THESE OTHER FINE BOOKS: 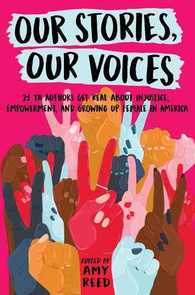 ON SHELVES NOW from SIMON PULSE
From Amy Reed, Ellen Hopkins, Amber Smith, Sandhya Menon, and more of your favorite YA authors comes an anthology of essays that explore the diverse experiences of injustice, empowerment, and growing up female in America.

This collection of twenty-one essays from major YA authors—including award-winning and bestselling writers—touches on a powerful range of topics related to growing up female in today’s America, and the intersection with race, religion, and ethnicity. Sure to inspire hope and solidarity to anyone who reads it, Our Stories, Our Voices belongs on every young woman’s shelf. 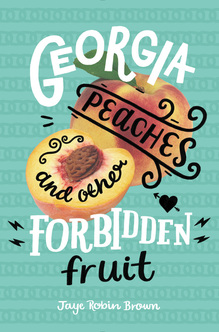 ON SHELVES NOW! FROM Harper Teen.
Joanna meets the perfect girl for her and must decide whether to break a promise that could change everything for her and her family or lose out on love in this charming young adult romance that’s perfect for fans of Julie Murphy’s Dumplin’ and Becky Albertalli’s Simon vs. the Homo Sapiens Agenda.
Joanna Gordon has been out and proud for years, but when her popular radio evangelist father remarries and decides to move all three of them from Atlanta to the more conservative Rome, Georgia, he asks Jo to do the impossible: to lie low for the rest of her senior year. And Jo reluctantly agrees.
Although it is (mostly) much easier for Jo to fit in as a straight girl, things get complicated when she meets Mary Carlson, the oh-so-tempting sister of her new friend at school. But Jo couldn’t possibly think of breaking her promise to her dad. Even if she’s starting to fall for the girl. Even if there’s a chance Mary Carlson might be interested in her, too. Right?

"A fast-paced narrative that is powerful, moving, and relatable. Brown expertly describes the complex nuances of faith and sexuality. This plot-driven story is humorous, and the characters are effortlessly likable. For fans of David Levithan and John Green’s Will Grayson, Will Grayson." - School Library Journal (Starred Review)

"Faith matters in this book, but so do family, friends, and being funny. The dialogue is snappy—Joanna is sharp tongued and sometimes bratty—and the characters aren’t types. Rather, they’re individuals navigating a complicated world, which makes for a rich and satisfying read." - Publisher's Weekly (Starred Review)

"This story is fun and funny with characters to root for (and against). But it’s more than just fun; it’s full of heart. Those who have struggled to reconcile faith and sexuality will find a book brimming with hope. It does not offer a rose-hued look at the world of religion and sexuality–it offers a clear glimpse of some of the more unpleasant ways people have decided to use the Bible to thump the LGBT community–but it also paints a picture of people of faith who love and embrace their LGBT family and friends." - AfterEllen.com

"Brimming with convincing dialogue that sparkles, Jo’s story is thoughtful and true. It’s peppered with familiar locations, from Fellini’s in Little Five Points to an artist’s Decatur warehouse along the railroad tracks. A memorable story and romance for anyone – no matter which way they fly."  - Atlanta Journal Constitution 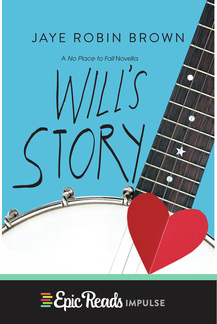 Available as E-book Now!
Will McKinney is a bad boy. At least, he used to be. After nearly getting arrested for some poor decisions involving prescription drugs, Will has been trying to turn over a new leaf. Well, it’s that or suffer the wrath of his father, the judge. Will's starting to get his life in Sevenmile, North Carolina, in order. He’s applying to colleges. He's dating the most popular girl at school. And he recently discovered a love of playing the banjo and performing in front of a crowd. But it's that same love of music that draws him to Amber Vaughn, his younger teenage brother's best friend. Now Will finds himself wondering if he just might really be a bad guy because even though he's got a girlfriend, he can't stop thinking about Amber.
​
Will’s Story is a companion novella to Jaye Robin Brown's young adult debut, No Place to Fall, and perfect for fans of her novel and newcomers alike. 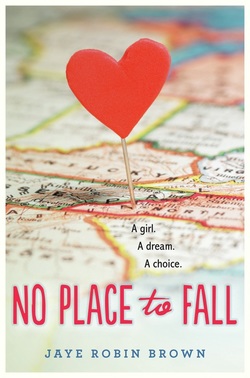 NO PLACE TO FALL - ON SHELVES NOW.
Amber Vaughn is a good girl. She sings solos at church, babysits her nephew after school, and spends every Friday night hanging out at her best friend Devon’s house. It’s only when Amber goes exploring in the woods near her home, singing camp songs with the hikers she meets on the Appalachian Trail, that she feels free—and when the bigger world feels just a little bit more in reach.

When Amber learns about an audition at the North Carolina School of the Arts, she decides that her dream—to sing on bigger stages—could also be her ticket to a new life. Devon’s older (and unavailable) brother, Will, helps Amber prepare for her one chance to try out for the hypercompetitive arts school. But the more time Will and Amber spend together, the more complicated their relationship becomes . . . and Amber starts to wonder if she’s such a good girl, after all.

Then, in an afternoon, the bottom drops out of her family’s world—and Amber is faced with an impossible choice between her promise as an artist and the people she loves. Amber always thought she knew what a good girl would do. But between “right” and “wrong,” there’s a whole world of possibilities.

Praise for no place to fall​:
The Sky is Everywhere  meets This lullaby in a poignant debut novel about family, friendships, and first romance.
"I was completely smitten." Robin constantine, author of the promise of amazing
"strikes a chord with the dreamer in all of us."  megan shepherd, author of the madman's daughter & her dark curiosity
"Debut author Brown is off to a wonderful start with authentic characters who speak in true voices. Amber could be the best friend you had in high school—she’s funny and moody and truthful and absolutely the real deal, and readers will clamor for another well-paced story featuring her and her friends." ~School library journal review
"Southern charm oozes off the page-the read is an enjoyable ride" ~ Kirkus reviews
"Brown immerses readers into a fully realized world of ordinary, flawed people who respond to situations in ways that are painfully credible, highlighting their ability to forgive even awful things, and focusing on the big-hearted kindness of people who know that neither holding on to hurt nor running away is an option" - The Bulletin of the center for children's books
"The writing shines when Amber describes the feelings that singing awakens in her, with “songs swirling inside me like butterflies.” One could wish for an accompanying soundtrack to fill out the fragments of lyrics that appear throughout." - VOYA
"Debut author Brown makes a small town in north carolina —where everyone knows everyone, and the outside world comes in via the appalachian trail hikers - feel real, but the heart of the story is amber , as she tries to find herself, love, and her voice." - Publishers weekly
“Lyrically written with a deep sense of place and music. There is so much joy within the pages that the sorrow hits hard and emotions rise and fall and rise again like a vocalist running scales.” - ALA Booklist